Yesterday I went in beautiful sunshine up to the slopes of Ísafjörður. There I saw a group of Snow Grouse or Snow Chicken search for food between the bushes. 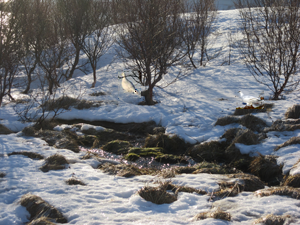 The story of the Snow Chicken
Once the Blessed Virgin Mary called all types of birds in a meeting and ordered them to wade fire. The birds were afraid but they could not say no, because she was the queen of heaven. The birds jumped all in and over the fire. After that their feeds were featherless, because the fire had burned them and the birds today are still equally. This reminds allways of the walk through the fire. But the Snow chicken was very afraid, so Mary was angry and desided as the bird would be in future most harmless and most unprotected bird and always be hounted too. The Hawk had been always her brother and now he would hount her, kill and live from her. Only one thing would be protect her: She can change her color from white in winter to grey-brown in summer, that is why the hawk could not found her all times. Always the hawk eats her heart he must vomit.
1 2 3 4 5 6 7 8 9 10 11 12 13 14 15 16 17 18 19 20